Grace is a member of the IFEEL Qualifications Faculty and fulfils the roles of tutor, mentor and assessor. 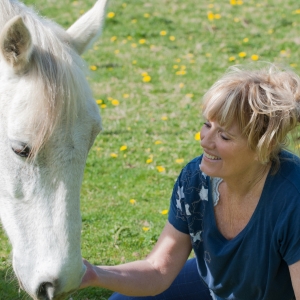 It was a chance swim with wild dolphins in Florida in her early 30’s that changed the course of her life. It led to Grace spending the summer as a volunteer working with a group of rescue dolphins. Up until then, Grace had been working in the business world in a succession of roles which resulted in her co-founding the serviced-office company, Regus. This encounter with dolphins re-ignited a love of nature and motivated her to leave the business world and train as a Speech and Language Therapist.

Grace has worked for both the NHS and privately, specialising in working with adults post head injury and stroke; as well as those presenting with functional voice problems, people who stammer and transgender clients. Grace found that the people she works with frequently have psychological problems alongside their communication difficulties. For this reason and in her quest to be the best therapist that she can, she subsequently trained in a variety of fields such as Neuro-Linguistic Programming, Solution-Focused Therapy and Positive Psychology.

At the same time as Grace was training to become a Speech and Language Therapist, she came to horses and riding. She quickly realised the emotional and psychological benefits she was experiencing and saw that her relationship with her horses was strongly linked to how she dealt with the challenges in the tapestry of life. It was this observation that eventually led her to training with IFEEL and setting up her own equine-facilitated work through, Grace with Horses in West Sussex. Grace also works as a traumatologist for a charity for women who have suffered domestic abuse and continues working privately as a Speech and Language Therapist.

As well as being invited to join the IFEEL faculty, Grace is involved with The Dare to Live Trust as a facilitator, working with military veterans on the equine facilitated courses which have been specially designed to support veterans who are suffering from trauma and PTSD.